When first observing with a somewhat larger telescope, in my case a 45 cm f4.6, it soon becomes apparent that there is a lot to be seen. It gradually becomes impossible to keep track of all the objects you’ve seen and which ones you haven’t without some sort of system. I use Skytools for this and its helped me a lot in keeping track of objects I hadn’t yet seen.

One thing that annoyed me however was that I was working from several separate lists, Messier or Caldwell or Hershel or Arp or Edge-on’s in Spring, etc. This caused me to wonder all the time when I was observing an object whether there wasn’t anything interesting nearby that I definitely needed to see. What I needed was an ultimate list, a list with all the objects I would ever want to see with my 45 cm. So I started compiling and ended up with 1314 objects.

I’ve included complete lists but also made selections of lists. All these selections were based on the visibility of the objects with a 45 cm under 21.7 mag/sec skies, not whether or not object were interesting to me. Most of the objects on the list are visible from 45 deg NB. About 88 objects not visible from the Netherlands (52 deg NB). The Really Big List consists of: 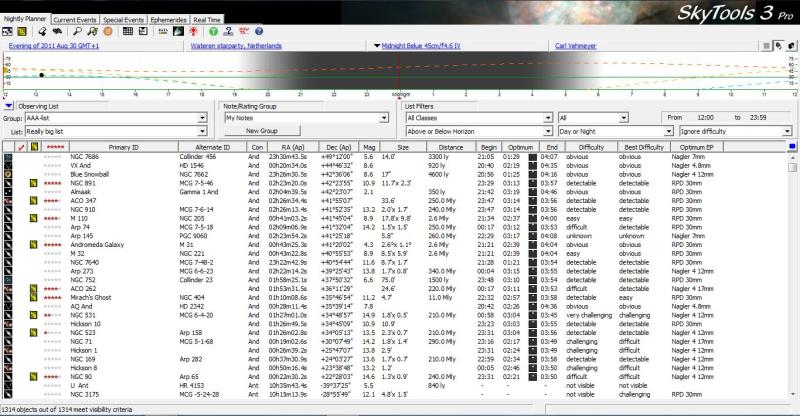 Athough I wanted one list, I felt I needed a separate list for objects I (and Skytools) considered a challenge for a 45 cm even under pristine skies. So I created a list based on challenges form this website and some others I found interesting. Contrary to the Really Big List the list with challenges is certainly not only based on what is almost visible with a 45 cm telescope, but is also based on which objects I personally found were interesting enough to add to this list.